My iPod Touch is REALLY excited about the SDK and though it didn’t come in Feb. as we all expected, Mar. 6th is ok with me. Bring on the extra hand computing power! 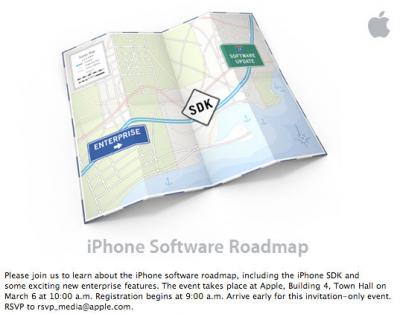 Crave and Reuters reports that Apple has sent out invitations for an event on Thursday morning detailing the iPhone Software Developement Kit (SDK):

"Please join us to learn about the iPhone software roadmap, including the iPhone SDK and some exciting new enterprise features," Apple said in an invitation sent to reporters.

Steve Jobs had originally announced that the iPhone and iPod Touch Software Development Kit (SDK) would be released in February 2008. Last week rumors pointed to a brief delay in the launch of the SDK. The SDK will allow developers to release their own software applications for both the iPod Touch and iPhone.
Few details have been made available, but the SDK has been reportedly already been seeded to select developers in the months ahead of its release. The event will take places at 10am Pacific time at Apple’s Cupertino campus.

← Beautiful Waste of Money
My XP Lappy Makes Me Happy… →